About Baqe - The African Basketball Show

Silalei is joined by DNG, The Professor, Marcus and guest hosts from across the continent each week as we check out the hype behind Basketball events, lifestyle and culture across Africa. 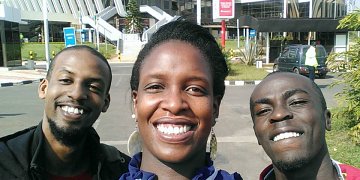 Love for the Game 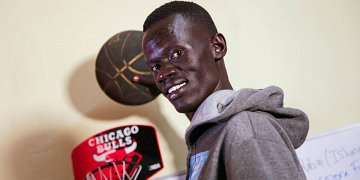 BAQE got a visit from the one and only Nick An Yang Qoun popularly known as KD today!
He is the TALLEST player in the Kenyan league at 6’11, How cool is that!

Now on its fourth season, BAQE has gone continental! Its now The African Basketball Show, with a continental focus and an Africa-wide audience. So some of you may need some coaching. It’s BAQE (ba-kay), Kenyan street slang (Sheng), for basketball.

“BAQE” the show was conceptualized in 2012 and in 2013 production began, focusing first on the high-octane Kenya University Basketball League (KUBL). Thanks to Zuku’s sponsorship, the league was renamed ZUBL for the duration of the sponsorship, and thanks to the efforts of Miles Inc, underwent a complete makeover. The television aspect of that makeover was a half-hour weekly show, “BAQE”, fronted by well-known host DNG and the tall(er) Silalei, who also happens to be the former captain of Kenya’s national women’s basketball team. The show also featured “The Professor”, a treasure trove of technical basketball information and statistics in the guise of Bosire Bogonko. BAQE went beyond the sport, delving into the culture, the characters and the supporters behind this explosive, wildly popular sport.

After a successful first season, BAQE and the ZUBL branched out to the neighboring country Uganda. The show also got a new addition in Marcus Kwikiriza, a popular Ugandan radio personality and avid basketball fan, whose familiar voice can often be heard commentating during games. “BAQE”, or “BAQO” for Ugandans, transforming the university league – and basketball in East Africa – bringing it to television screens across the region and beyond.

Season 3 took viewers back to Kenya for the second edition of ZUBL with fresher moves, bigger hype, and hotter players for another breathtaking 26 episodes with the team also exploring the world of basketball further out across the continent. This inspired an idea that would bring viewers to the 4th season of BAQE with a fresh new feel. The show went continental, boldly naming ourselves “ BAQE, The African Basketball Show”; providing a window into one of the most exciting demographics on the continent, exploring the culture and trends of basketball as it expands and takes root across Africa.

Still hosted by Silalei and with a plethora of local co-hosts in the countries BAQE travels to, the show features “The Professor” with the new additions of “Mukabi-D”, the fitness beast and “Rampage”, BAQE’s hot in-house Streetball moves instructor.

As Silalei, puts it: “We are all connected by the love of the game and the culture that surrounds it.”

It’s BAQE Africa’s final episode of the season and we’re going out with a bang! The year we’ve seen some of the best of the best in Africa get in our faces and we want to take you down memory lane with a compilation of...